Toothed plane blades prevent tear-out and are efficient wood removers – How to make one.

Planing wood is a little like stroking your furry pet, as long as you go in the right direction the blade glides over the wood fibers cutting cleanly as it goes, but turn and go the other direction, ie “rubbing your pet up the wrong way” and the blade catches under the wood fibers and instead of cutting, it tears them out.  The curly maple so favored for violin backs, has grain running alternately  in both directions, every time the plane blade runs into  patch of “up grain” there is a tendency for chunks of wood to tear out.  To help deal with this the toothed plane blade was invented, slots at the cutting edge of the blade effectively create a row of small chisels with spaces between them and, instead of tearing out large chunks of wood there are many small, controlled tears.

I’ve been using toothed plane blades in my little block planes for years but recently I came up with two reasons to have one for my larger bench plane.  The first was practical; one of my wood suppliers sent me a lot of maple rib stock that was 5mm thick (its usually 2 -2.5mm), it is lovely curly wood but there’s just too much of it and planing it down to thickness with my little block planes was taking me 30-40 minutes per rib which was killing my elbows.

The second reason was asthetic; I decided to copy a Tononi cello, a lovely eighteenth century Venitian instrument which has mega toothed plane-blade marks on the inside. The tooth marks also show pretty liberally on the outside and provide some feature to otherwise completely plain, un-figured poplar wood. I wanted to include these marks in my copies.

Badass toothed planing on the inside of this Tononi cello

So I called Ron Hock who had made me the toothed blade for my block plane, he said it would take 4-6 months so I decided to make my own, not only would I get it quicker but I would have control over the toothing pattern.  I bought a little Dremel metal cut-off wheel  and used my drill press and vise to guide the cuts into a 60mm bench plane blade The wheel was starting to dull by the end of the job but otherwise cut quite quickly

The Tononi blade had approx 2mm teeth and 1mm slots I eyeballed the spacing which give me some of that old time funky randomness.  The new blade matched pretty nicely to the original

Loading the blade into my trusty Bailey  No.6, I tried it on some Aspen which it breezed through

The real test was how it worked on figured maple.  Taking one of the 5mm planks I had it ready for smoothing in about 5 mins

The ridges and small tears smoothed off with a block plane… 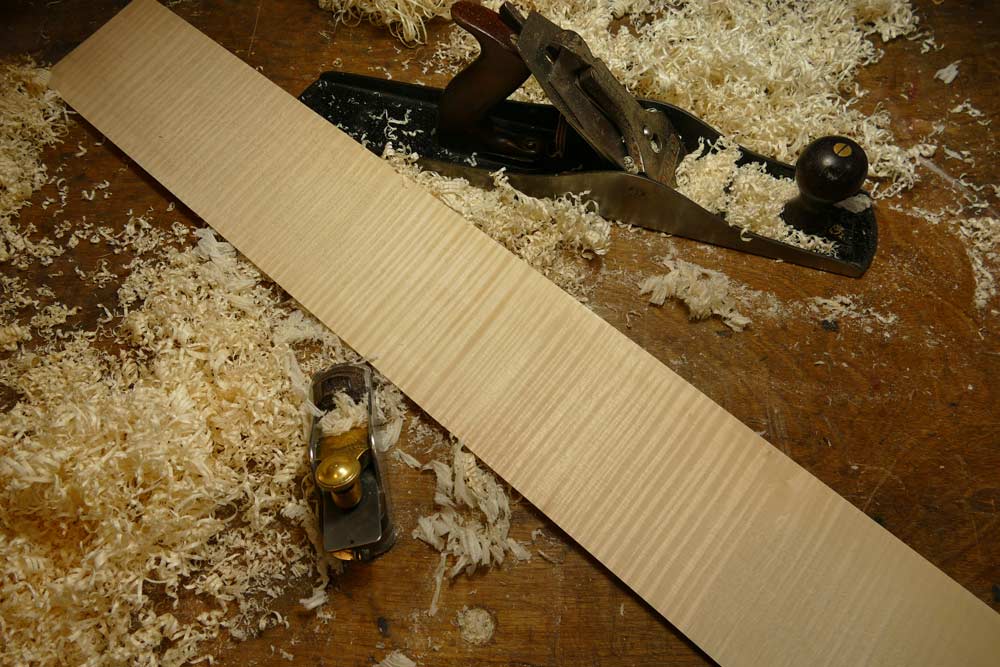 Looking at the shavings I found that some were still joined and that had lead to a little more tear out on the ribs. The deep slots seem to be key to a successful toothed plane-blade and I went back and deepened the grooves in mine 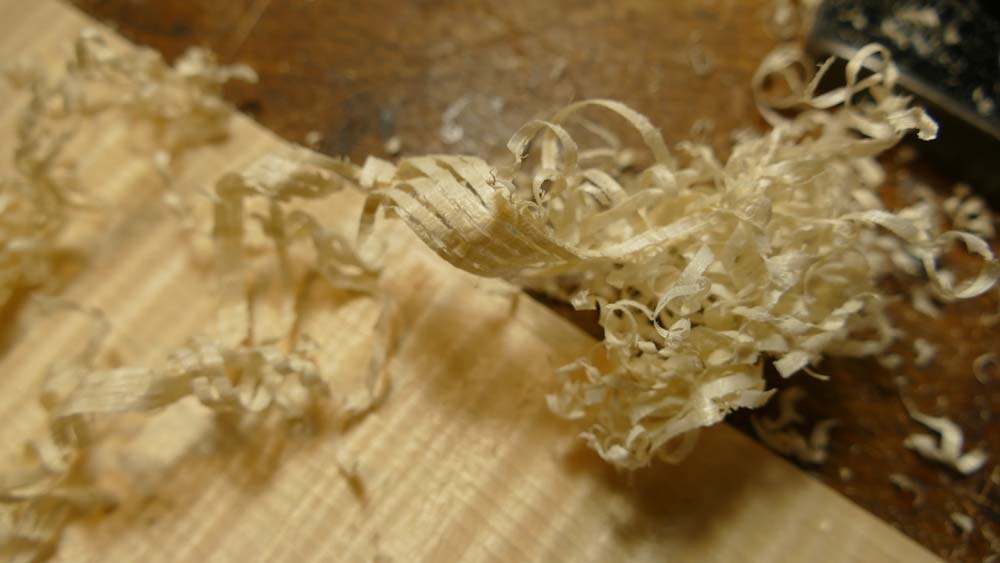 Delighted with my new toothed plane I went on try it for squaring up a cello neck block. Using a regular blade I was taking off shavings about 0.08 mm thick, switching to the toothed blade, planing required less effort and the shavings were about 0.12 mm thick.  In other words the toothed plane is just more efficient at removing wood, which makes me wonder how much more they may have been used in the past. Ive seen several 19th century french cellos where very fine toothed plane blade marks were left on both the insides of the plates and rib edges. I’ve also seen fingerboard to neck joints left straight off of fine toothed blades, they were probably made by planes like these described by Anthony Hay.  I wouldn’t reccommend final glueing joints like this but I’d be interested to try rough fitting them that way before finishing with a regular blade,  I suspect the job would go quicker